Social hormones and human behavior: what do we know and where do we go from here 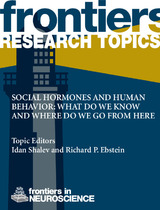 Intranasal oxytocin: potential therapeutic regulation of brain function in psychiatric illness. Several important aspects of intranasally delivered OT (IN OT) treatment of brain-based illness are represented. One potential way that IN OT may cross the blood-brain barrier and cause central effects is represented: directly via extraneuronal/perineuronal routes along trigeminal or olfactory nerve pathways. Other mechanisms of entry (bulk flow, lymphatic channels, intraneuronal transport, active or passive transport from vasculature) are discussed in references and the text. IN OT may cause some of its central effects by stimulating the endogenous OT system, which secretes OT into the peripheral circulation (right pullout), and has both direct, “wired” and diffusion-mediated central effects. Through these mechanisms, IN OT impacts the function of amygdala-anchored connectivity networks in normal, as well as important brain regions (amygdala, insula, anterior cingulate, medial prefrontal cortex) in patients with psychiatric illness. For simplicity, not all brain areas impacted by OT are shown. For more details, see review by MacDonald and Feifel in Part A: Helping oxytocin deliver- considerations in the development of oxytocin-based therapeutics for brain disorders.