The event of art 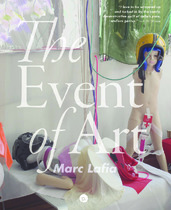 It was a few days after 9/11 that I met Marc La a for the rst time. We were both enrolled in a residency program at the Atlantic Center for the Arts, which was located on an idyllic estuary in the middle of Florida, oddly enough only a stone’s throw from where the pilots of the World Trade Center tragedy were trained. There were about ten of us, and many, like myself, had come down in a state of shell-shock from NYC. Marc hailed from San Francisco and seemed like an only child away at camp for the rst time. As we mutated between a state of disbelief and despair, our evenings were occupied by alcohol-soaked group critiques, whereby we’d o er up our work to one another. Marc, at his own bequest, was one of the rst to present. His lm occupied more time than anyone had patience for and was not only monotonous, hard to understand, and droning to the brink of being annoying, but also, given the global atmosphere and my state of mind, brilliantly razor-sharp in message and form. In the aftermath of 9/11, incessant replaying of destruction footage gave scholars and the public alike enough fodder to examine our schizophrenic, subservient, and often submissive relationship to images. What had been anticipated time and time again in cinema and the public’s visual imagination had now been actualized. La a’s aptly titled Confessions of an Image consists of twenty-one short visual and audio essays that interrogate the history, production, distribution and consumption of the photographic image. A series of scratchy and often blurry images captured by his Canon Elph – the ultimate point-and-shoot, which dominated La a’s practice for many years – plods along to a monologue of the artist himself belligerently ponti cating (from what sounds like from far out in the universe) about electromagnetic light crisscrossing the planet.