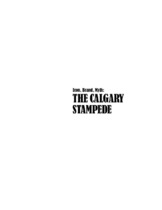 The idea for this book came as a result of the inaugural course on the Calgary Exhibition and Stampede (Calgary Stampede as of spring 2007) offered by the Faculty of Communication and Culture at the University of Calgary in the summer of 2004. This innovative course was based on guest lectures, many of which were delivered by members of the above faculty. At a get-together following the course there was general agreement among participants that the various lectures might serve a wider purpose if they were transformed into articles and made available to a larger audience. All of the contributors to this book either lectured or were the subjects of reference in the three Stampede courses offered in the summers of 2004, 2005, and 2006. The course itself grew out of a growing awareness that the Stampede has evolved into a cultural phenomenon. Similar events are held annually throughout North America. Midways, rodeos, parades, performances, and agricultural and other exhibits are all part of an annual fairground tradition in countless cities and towns, yet none evokes reactions as does the Calgary Stampede. Growing up as a boy in Sydney, Australia, I visited the Royal Easter Show every year and was drawn in wonderment to scenes and events very similar to those I was to encounter later in another country and another city. Yet when I donned western garb to attend my first Stampede in 1964, feeling strange and out of place, I had already been imbued with the notion that I was now part of something special, a festive tradition unique to Calgary. In a way, my impression was valid. Unlike the Royal Easter Show, the Stampede was not simply attended; it was experienced. I learned my first and probably most important lesson about the Stampede that day: it had more to do with the act of participation than with offered opportunities. Paradoxically, it has been this capacity to embody a significance that transcends the sum of its various components that explains in part why the Stampede is held in such high and low regard. The Calgary Stampede can claim many legitimacies. It hosts the premier event in a popular professional sport. In addition to being of significant economic worth to the city, the Stampede is based on a valid historic tradition that dates to the late nineteenth century and provides in many ways an interpretive window into the historical development of the prairie and foothills West. The Stampede has supported agriculture and the livestock industry for almost a century while promoting sports and western art and showcasing other events of cultural and social importance. Its capacity to solicit and organize phenomenal volunteer support is the envy of organizations worldwide.