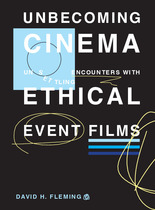 For both the philosopher-cum-artist Friedrich Nietzsche and the artist-cum-philosopher Antonin Artaud, thinking through, or with, stimulating works of art offered one of the few ameliorations from the smothering drudgery of so-called ‘normal’ (or normalized) life. The other came from the emancipatory embrace of madness, delirium and disorder. Imprimis, Unbecoming Cinema sets out to synthesize both, for today we arguably need disruptive encounters evermore, to help defamiliarize, disorganize and destabilize the systems that everywhere deform and distort life. Although admittedly exploring a range of mad and maddening films and ‘non-cinema’ (see Brown 2016; Nagib 2016) from diverse sectors, times and places – aimed at a broad spectrum of demographics including film festival audiences, art gallery visitors, YouTube viewers, ‘head audiences’ and niche ‘gore whore’ fangirls – the works explored throughout Unbecoming Cinema appear arranged together courtesy of a shared desire to construct new conceptual dimensions for thought, and think or impart difference. More specifically, the book sets out to explore, survey, map and reconnoitre a diverse range of ethico-political films that work to communicate1 what it is ‘we are up against’, and raise ethical questions about ‘how best to proceed’. Or to put it more plainly, the book dives into expressive screen projects that desire or aspire to make a real difference in the world, by plugging themselves into, and operating upon, the nerves, brains, bodies and milieus they encounter. Unbecoming Cinema is primarily about moving encounters, then, and is itself a product of these moving encounters with thinking films: of being touched by artistic bodies that communicate difference, or agitated to feel-think alterity. As such, we maintain that the ‘delirious’ (Seem 2004) ethical philosophy of Gilles Deleuze, both with and without his erstwhile collaborator Félix Guattari, appears best suited for approaching such forms of film; not only for its capacity to conceptualize becomings, events and the thinking of difference, but also because against any narrow conception of ivory tower intellectualism, Deleuze and Guattari insist that philosophy be inseparable from a lived way of life, and address itself to the real-world problems that confront us (otherwise it would be of absolutely no use). What remains true of philosophy also extends to our understanding of ethical art throughout this project, for this too is comprehended in terms of addressing itself to real- world problems, or operating as a productive agent or force for change.