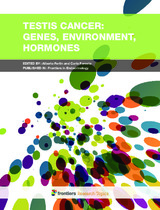 Testicular cancer (TC) is the most common cancer in males aged 20-40 years, with a worldwide incidence of 7.5 per 100,000, but the rates vary considerably between countries and ethnic groups and there is evidence also for an increasing incidence in last decades. About 95% of all TCs are represented by testicular germ cell tumors (TGCTs), which include seminoma and non-seminoma histological types. It is generally assumed that the development of TGCT is under endocrine control. In particular, unbalanced androgen/estrogen levels and/or activity are believed to represent the key events for TGCT development and progression. Furthermore, recent evidence has suggested genetic association of TGCT with variations in genes involved in hypothalamic-pituitary-testicular axis and steroidogenic enzymes. This recent evidence expands the current knowledge on the role of genetic contribution in testicular cancer susceptibility, and supports the hypothesis that variations in hormone metabolism genes might change the hormonal environment implicated in testicular carcinogenesis. Therefore, hormonal carcinogenesis is an important and controversial area of current research in TGCT, and further attention is given to genetic factors influencing hormone-related cancer risk. The genetic component to TGCT is in general strong. In fact, although environmental factors clearly contribute to TGCT development (and probably to its increasing incidence in some geographical areas), the proportion of TGCT susceptibility accounted for by the genetic effects is estimated at 25%. TGCT has high familial risks compared with most other cancer types that are generally no more than two-fold: brothers of individuals with TGCT have an 8- to 12-fold increased risk of disease, and sons of affected individuals have a 4- to 6-fold increased risk. Despite this strong familial relative risk, early results from linkage studies identified a limited relationship with genetic factors, suggesting that TGCT is a genetically complex trait. However, more recently, four genome-wide association studies (GWAS) from the UK and USA have reported association of TGCTs with six new loci (KITLG, SPRY4, BAK1, DMRT1, TERT, and ATF7IP). The strongest association for TGCT susceptibility was found for SNPs in KITLG (ligand for the membrane-bound receptor tyrosine kinase KIT) gene with a greater than 2.5-fold increased risk of disease per major allele, which is the highest reported for any cancer to date. These studies are being now replicated by other researches and attention is given to the relationship between these genetic variations, TGCT risk and frequently associated anomalies of the reproductive tract, such as cryptorchidism and infertility. Finally, over the past few decades, TCGT research has focused also on external environmental causes acting mainly as endocrine disrupters of androgen and oestrogen pathways, even during the foetal development of the testis. It is well known that the testicular dysgenesis syndrome (TDS) hypothesis, proposed ten years ago, suggests that disturbed testicular development in fetal life may result in one or more of four disorders postnatally, named cryptorchidism, hypospadias, poor semen quality, and TGCT. These four disorders are therefore considered as one clinical entity and are linked together by epidemiological and pathophysiological relations. The relative contribution of genetics and environment in TGCT development, and the interactions between endocrine disruptors and variations in genes involved in hormonal carcinogenesis is therefore another interesting area of research.