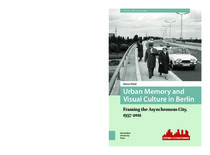 Contemporary Berlin, a city scarred by the twentieth century, displays its past on almost every street corner, it would seem. The upheavals it has experienced have not just been political, but have also been accompanied by a series of radical physical transformations in the built environment. A large body of literature has been produced on the sophisticated memory work that has been undertaken in Germany, and Berlin in particular. One of those authors, Aleida Assmann, asserts that German places of memory cannot be adequately understood through Pierre Nora’s model of lieux de mémoire, in which modernity’s process of accelerated renewal and obsolescence generates, in a compensatory reaction, the proliferation of museums and sites of memory. Assmann ascribes this to the fact that the traumatic sites are the locations of acts of atrocity that surpass human understanding.1 Contemporary Berlin’s memory landscape has been read almost exclusively through its expression of Germany’s troubled national past, be it National Socialism or the German Democratic Republic. This book is not primarily concerned with the narrative elaborations of identity that take place around sites of National Socialist atrocity in Berlin. That work has been done, by amongst others, Brian Ladd and Rudy Koshar, as well as Andrew Webber, who takes a psycho-topographical approach to the city in Berlin. City of the Twentieth Century, Karen Till, who focuses on the politics of contemporary place-making in The New Berlin, Jennifer Jordan, who investigates processes of place-making in Structures of Memory in relation to the demands of ‘real estate’, and Janet Ward, who devotes a section to Holocaust memorial architecture in her study of Post-Wall Berlin. The validity of this earlier work is assured. This engagement with the material past has in earlier work generally been framed in terms of ‘remembering well’. 2 What might it mean to remember well, beyond the frame of national trauma?