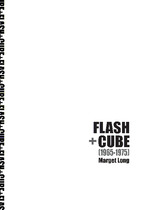 This book is about the Sylvania flashcube—a space-aged, flash photography device, revolutionary in 1965 and nearly obsolete by 1975. Like any visual study of a single object, this project isn’t fixed neatly in one discipline or one time. When I look back at this artifact I am given access not only to its material residue but also to its more ghostly reflections of the cultural, political and economic imperatives of its moment.1 Why this object? The flashcube was a mesmerizingly beautiful and utopian source of light. It was manufactured by the millions, for amateur use at a time when photography was radically expanding as a domestic practice. The cool, contained cube marked an important break from the burn-prone, open-faced flash devices of the 1940s and 1950s. 2 Its shiny, Warholian surface encapsulated the counter cultural zeitgeist of the late 1960s; after firing, the flashcube’s blasted interior looks like the devastated landscape of an atomic age. Despite its mass appeal the flashcube was, like most technologies, eventually abandoned for bigger and brighter things. Today, aside from a short entry on Wikipedia and its collection as a novelty item online, the flashcube is largely forgotten. Photographic flash is, in fact, often relegated to a footnote and is strikingly under-analyzed. 3 Yet flash’s blinding effects and military genealogy, and the flashcube’s precise contemporaneity with the war in Vietnam make this a rich analytical object to reflect on the continuous links between light, war, history and photography. As Claude Lévi-Struass would put it, the flashcube is good to think with.