From realism to abstraction : the art of J. B. Taylor 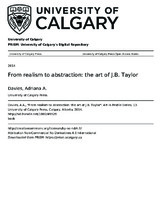 John Benjamin or J. B. (Jack) Taylor (1917–1970) was born and grew up in Charlottetown, Prince Edward Island. It is a historic city, with strong English roots, and the location of the conference that resulted in the birth of Canada. Its downtown core comprises the initial five hundred lots surveyed by Samuel Johannes Holland (1728–1801), a Royal Engineer and the first Surveyor General of British North America. Three rivers meet at its harbour, which opens into Northumberland Strait. While growing up in this typically picturesque place with some of the oldest buildings in English Canada, Taylor was exposed to the landscapes of the maritime region. Rocky coves and inlets, fishing hamlets and, in the interior, small farms are all on a comfortable human scale. Only, the sea, the limitless deep, embodied the grandeur of nature. This is the world that he learned to paint under the tutelage of his first teacher Mabel Gass and his mentor Frank Vincent DuMond at the Art Students League of New York. As Taylor travelled westward, like other Canadians and visitors, he was awed by the expanses of the three prairie “steps” rising from Manitoba, to Saskatchewan and, finally, Alberta. His wartime service in the Canadian Air Force enabled him to traverse the Great Plains by train and airplane. Taylor depicted what he saw as backdrops for some of his aircraft paintings used to train air crew in recognition during World War II, as well as panoramas and murals for messes and recreation rooms.