Mineral building traditions in the himalayas : the mineralogical impact on the use of clay as building material 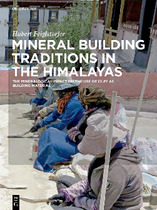 The use of mineral based building material in the Himalayas has a long tradition, probably reaching back to the first settlements. Use of such material was, and partially still is, deeply anchored as an essential material cultural fingerprint and certainly a manifestation of cultural identity. Mineral building tradition influenced the evolution of certain structural features which were inseparably intermingled with daily life and the structuring of the annual rural working cycle. Different techniques were applied and adjusted to local conditions and needs. Rammed earth structures, adobe bricks, flat roofs, clay plaster, wattle and daub constructions, Tibetan stoves, clay sculptures and pottery are made with locally available resources on a mineral basis. The use of fired bricks in the Himalayas is reserved for the Himalayan border zones while in the Tibetan cultural zone we find fired bricks at only a few historical structures, for example, the Jokhang in Lhasa. Contrary to bricks, kilns for pottery have a long tradition in the Tibetan cultural zone. Within the last years in Ladakh the first known kiln was erected. The use of clay and the choice of the appropriate building technique are highly dependent on the locally available natural resources such as the type of clay, vegetation and climatic conditions, all of which may change from region to region. The beginning of earth building tradition remains open. We can much better argue for the existence of particular traditions in a historical context of prestigious – primarily religious – structures. In the Western Himalayas the earliest Buddhist structures using clay as part of the primary structure can be dated back at least to the 10th century, and in the Central Himalayas to the 7th century CE. This dating has to be understood as an imprecise benchmark since we assume that already in earlier days clay was used at least for the preparation of mortar, plaster or flat roof constructions. As an example we can mention the 9th/10th century temple in Ribba, which is primarily a wooden structure (cf. Feiglstorfer, forthcoming a), with clay used for the interior plaster, the rammed earth floor and the flat roof. In this concern, knowledge about the foundation date of particular structures is certainly helpful in addressing the existence of a certain tradition in a particular period. Beyond this it is the question for a specific material culture itself. The availability of classifiable historical data depends on the availability of written sources or empirical examinations. Due to historical data, religious structures can be dated, i.e. by wall inscriptions or other written records, while historical data of vernacular structures usually rely on oral information which may be imprecise or distorted by misinterpretations of the informer or by missing data. Traditions may have changed by adapting changing conditions and needs. Those we find today may not have existed in the same form at an earlier period at the same place. As mentioned by Nyema Tashi, in Lhasa until roughly 600 years ago adobe and rammed earth structures were prevalent. This changed in the following periods when stone constructions were preferred, for example, during the 5th Dalai Lama in the 17th century (Interview Nyema Tashi 2014).