The writing on the wall : the work of Joane Cardinal-Schubert 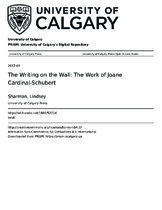 This publication was largely written and compiled on the traditional territories of the Blackfoot and the people of the Treaty 7 region of Southern Alberta. The works illustrated are drawn primarily from collections, both public and private, on this same land which includes the Siksika, the Piikuni, the Kainai, the Tsuu T’ina and the Stoney Nakoda First Nations. Dr. Joane Cardinal-Schubert, RCA affirmed herself as “Blackfoot-Blood” or Kainai. Cardinal-Schubert introduced herself and her work succinctly and aptly in Loretta Todd’s film, Hands of History by simply stating, “I am Joane Cardinal-Schubert – and I play a lot.”