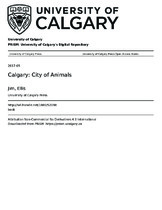 Long before the traders and the North West Mounted Police and the European set- tlers arrived, and long before the peoples of the First Nations gathered at the place called Mohkínstsis, there were the animals. From its beginnings as a human settlement at the confluence of the Elbow and the Bow Rivers, the story of Calgary is not just a history of people but, in many ways, the history of our dealings with our fellow creatures. The fur trade, cattle ranching, and the Greatest Outdoor Show on Earth have all left pro- found marks on the city’s culture and geography. How have our interactions with animals shaped the city? What traces can we locate on Calgary’s landscape, real or imaginary? The story of human and animal relations is not just a story of the past. Our cohabitation with animals also, of course, concerns the present, and the future too (we hope). Ac- cording to the City of Calgary’s biodiversity document, there are at present 52 species of mammals in the city, 365 species of birds, 4 of reptiles, 6 of amphibians and 22 species of fish. 1 Where do these animals live in the city? How does the city support an- imal life? How do we categorize the different animals that live among us (pets, livestock, entertainers, pests?), and how does this affect our relations with them? More radically, what does it mean to think of humans as one animal among many in an urban bio- sphere? How can we make the city a site that supports the co-flourishing of all of its animal life, human and non-human?