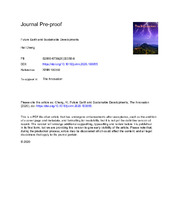 Our planet has been undergoing continuous warming since the industrialization (1850 CE), such that its mean temperature has risen ~1°C, and continues to rise at the present day. This is mainly due to human activity, particularly CO2 emissions, resulting in far-reaching and mostly irreversible consequences to Earth’s systems. These include dominant negative changes in the atmosphere, hydrosphere, lithosphere, cryosphere and biosphere. Since human influence has now overwhelmingly exceeded natural forces on a globe scale, some earth scientists have proposed a geological epoch called the “Anthropocene”: a new epoch in the history of our planet, named after significant humanity’s influence on the globe. 1 Indeed, our planet’s climate is changing rapidly in the Anthropocene, and so climate change will become the defining challenge of our time, and its impacts will affect generations to come.