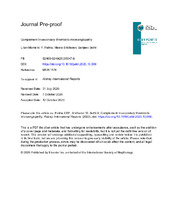 Thrombotic microangiopathy (TMA) is a condition characterized by thrombocytopenia and microangiopathic hemolytic anemia (MAHA) with varying degrees of organ damage in the setting of normal International Normalized Ratio (INR) and activated Partial Thromboplastin Time (aPTT). Complement has been implicated in the etiology of TMA, which are classified as Primary TMA - when genetic and acquired defects in complement proteins are the primary drivers of TMA (complement-mediated TMA or atypical hemolytic uremic syndrome, aHUS) or Secondary TMA, when complement activation occurs in the context of other disease processes, such as infection, malignant hypertension, autoimmune disease, malignancy, transplantation, pregnancy and drugs. It is important to recognize that this classification is not absolute as genetic variants in complement genes have been identified in patients with secondary TMA, and distinguishing complement/genetic-mediated TMA from secondary causes of TMA can be challenging and lead to potentially harmful delays in treatment. In this review, we focus on data supporting the involvement of complement in aHUS and in secondary forms of TMA associated with malignant hypertension, drugs, autoimmune diseases, pregnancy and infections. In aHUS, genetic variants in complement genes are found in up to 60% of patients, whereas in the secondary forms the finding of genetic defects is variable, ranging from almost 60% in TMA associated with malignant hypertension to less than 10% in drug-induced TMA. Based on these findings, a new approach to management of TMA is proposed.