Forest and rangeland soils of the United States under changing conditions : a comprehensive science synthesis 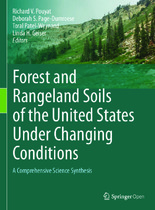 Soils have life-giving and life-sustaining capabilities that directly or indirectly support all living organisms. Humanity’s well-being and health are tied directly to the health of soils. Worldwide, soil processes contribute to an abundant supply of water, food, and fiber while also tempering a warming climate. More than 40% of global terrestrial carbon (C) is stored in the soils of forests, grasslands, and shrublands (Jackson et al. 2017). Forest and rangeland soils of the United States make a disproportionately large contribution to such ecosystem services compared to their geographic extent. Although forests and rangelands occupy only about onethird of the land area in the United States, they supply 80% of the surface freshwater (Sedell et al. 2000) and sequester 75% of the total C to a depth of 30 m stored in the nation (Liu et al. 2013). Ecosystem alterations associated with land-use change and other pressures may impair the ability of soils to fulfill their foundational role. Today, a number of disturbances compound the vulnerability of forest and rangeland soils across the United States. Of greatest concern are various environmental changes, continued overgrazing, catastrophic wildfire, and invasive plant and animal species. Effects on soil health (soil functions mediated by living organisms) are expected to be more severe when two or more of these disturbances or stressors interact with each other. Changes in the climate are likely to magnify or accelerate all of these impacts on forest and rangeland soils. However, great uncertainty surrounds predictions of climate-induced impacts because overall effects will depend on the magnitude of temperature and precipitation changes and the frequency of extreme events.