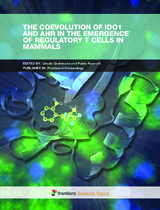 Indoleamine 2,3-dioxygenase (IDO1) is an ancestral enzyme that, initially confined to the regulation of tryptophan availability in local tissue microenvironments, is now considered to play a wider role that extends to homeostasis and plasticity of the immune system. Thus IDO biology has implications for many aspects of immunopathology, including viral infections, neoplasia, autoimmunity, and chronic inflammation. Its immunoregulatory effects are mainly mediated by dendritic cells (DCs) and involve not only tryptophan deprivation but also production of kynurenines that act on IDO- DCs, thus rendering an otherwise stimulatory DC capable of regulatory effects, as well as on T cells. The aryl hydrocarbon receptor (AhR) is a ligand-operated transcription factor originally recognized as the effector mediating the pathologic effects of dioxins and other pollutants. However, it is now well established that AhR activation by endogenous ligands can produce immunoregulatory effects. The IDO1 mechanism appears to have been selected through phylogenesis primarily to prevent overreacting responses to TLR-recognized pathogen-associated molecular patterns, and only later did it become involved in the response to T cell receptor-recognized antigens. As a result, in mammals, IDO1 has become pivotal in fetomaternal tolerance, at a time when regulatory T cells emerged to meet the same need, namely protecting the fetus. IDO1 and regulatory T (Treg) cells may have then coevolved to broaden their function well beyond their initial task of protecting the fetus, such that, in acquired immunity, IDO1 (with its dual enzymic and signaling function) has turned into an important component of the peripheral generation and effector function of regulatory T cells. AhR, in turn, which has a role in regulatory T-cell generation, is presumed to have evolved from invertebrates, where it served a ligand-independent role in normal development processes. Evolution of the receptor in vertebrates resulted in the ability to bind structurally different ligands, including xenobiotics and microbiota-derived catabolites. Considering the inability of invertebrate AhR homologs to bind dioxins, the adaptive role of the AhR to act as a regulator of xenobiotic-metabolizing enzymes may have been a vertebrate innovation, to later acquire an additional immune regulatory role by coevolutive pressure in mammals by IDO1 and regulatory T cells. Thus an entirely new paradigm in immunology, and more specifically in immune tolerance, is the coevolution of three systems, namely, the IDO1 mechanism, AhR-driven gene transcription, and T-cell regulatory activity, that originating from the initial need of protecting the fetus in mammals, have later turned into a pivotal mechanism of peripheral tolerance in autoimmunity, transplantation, and neoplasia.