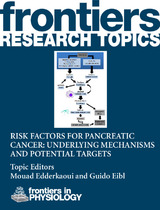 Pancreatic Cancer has been and still is one of the deadliest types of human malignancies. The annual mortality rates almost equal incidence rates making this disease virtually universally fatal. The 5-year survival of patients with pancreatic cancer is a dismal 5% or less. Therapeutic strategies are extremely limited with gemcitabine extending the survival by a disappointing few weeks. The failure of several randomized clinical trials in the past decade investigating the therapeutic efficacy of different mono- and combination therapies reflects our limited knowledge of pancreatic cancer biology. In addition, biomarkers for early detection are sorely missing. Several pancreatic cancer risk factors have been identified. Unfortunately, the underlying mechanisms linking these risk factors to cancer development are poorly understood. Well known possible and probable risk factors for the development of pancreatic cancer are age, smoking, chronic pancreatitis, obesity, and type-2 diabetes mellitus. Age is certainly of the most important risk factors as most cases of pancreatic cancer occur in the elderly population. Smoking ten cigarettes a day increases the risk by 2.6 times and smoking a pack per day increases it by 5 folds. Chronic pancreatitis increases the risk of pancreatic cancer by up to 13 times. Patients with hereditary forms of chronic pancreatitis have an even higher risk. Obesity, a growing global health problem, increases the risk of pancreatic cancer by about 1.5 fold. Type-2 diabetes mellitus is also associated with an increased risk of pancreatic cancer by at least two-fold. The more recent the onset of diabetes, the stronger the correlation with pancreatic cancer is. In addition, heavy alcohol drinking, a family history of the disease, male gender and African American ethnicity are other risk factors for pancreatic cancer. Pancreatic cancer is characterized by several genetic alterations including mutations in the Kras proto-oncogene and mutations in the tumor suppressor genes p53 and p16. While Kras mutations are currently thought as early events present in a certain percentage of pancreatic intraepithelial neoplasias (PanINs), known precursor lesions of pancreatic ductal adenocarcinomas, mutations in tumor suppressor genes, e.g. p53, seem to accumulate later during progression. In addition, several intracellular signaling pathways are amplified or enhanced, including the MAPK/ERK and PI3K/AKT signaling modules. Overall, these genetic alterations lead to enhanced and sustained proliferation, resistance to cell death, invasive and metastatic potential, and angiogenesis, all hallmarks of cancers. The scope of this Research Topic is to collect data and knowledge of how risk factors increase the risk of initiation/progression of pancreatic cancer. Of particular interest are potential underlying molecular mechanisms. Understanding the molecular mechanisms and driving signaling pathways will ultimately allow the development of targeted interventions to disrupt the risk factor-induced cancer development. This Research Topic is interested in a broad range of risk factors, including genetic and environmental, and welcomes original papers, mini and full reviews, and hypothesis papers. Manuscripts that address the effect of combination of risk factors on pancreatic cancer development and progression are of great interest as well.