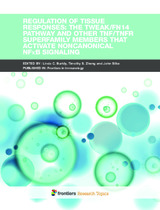 The immune system mediates tissue responses under both physiological and pathological conditions, impacting the inflammatory, fibrogenic and regenerative components. In addition to various leukocyte subsets, it is now recognized that epithelial, endothelial and other non-hematopoietic tissue cell types actively contribute to the interplay shaping tissue responses. Further understanding the molecular pathways and mechanisms mediating these tissue responses is of great interest. In the past decade, TNF-like weak inducer of apoptosis (TWEAK) and its receptor, FGF-inducible molecule-14 (Fn14), members of the TNF/TNFR superfamily, have emerged as a prominent molecular axis regulating tissue responses. Generally leukocyte-derived, TWEAK signals through Fn14 which is highly induced in injured and diseased tissues on the surface of parenchymal, stromal and progenitor cells, thereby orchestrating a host of tissue-shaping responses, including inflammation, angiogenesis, cell proliferation or death, and the regulation of progenitor cells. Compelling preclinical results indicate that whereas transient TWEAK/Fn14 activation promotes productive tissue responses after acute injury, excessive or persistent TWEAK/Fn14 activation drives pathological tissue responses, leading to progressive damage and degeneration in target organs of injury, autoimmune and inflammatory diseases and cancer. Given that the highly inducible pattern of Fn14 expression is well conserved between mouse and man, the role of TWEAK/Fn14 in human disease is an area of intense investigation. Recent findings have also begun to shed light on how the TWEAK/Fn14 pathway fits into the immune network, interplaying with other well-established pathways, including TNFa, IL-17, IL-13 and TGFb, in regulating tissue responses. The noncanonical nuclear factor kB (NF?B) pathway plays a role in immunity and disease pathologies and appears to be activated by only a subset of TNF/ TNFR superfamily members. Of the various signaling pathways downstream of TWEAK/Fn14, particular attention has been placed on the noncanonical NF?B pathway given that given that TWEAK induces acute activation of canonical NF?B but prolonged activation of noncanonical pathway. Thus dovetailing of the TWEAK/Fn14 axis with noncanonical NF?B pathway activation may be a key mechanism underlying tissue responses. Also of great interest is a deeper understanding of where, when and how tissue responses are regulated by other TNF/ TNFR superfamily members that can signal through noncanonical NF?B. This Research Topic issue will cover:1. TWEAK/Fn14 pathway biology, role in tissue responses, injury, and disease pathogenesis2. Role of noncanonical NFkB signaling cascade in tissue responses3. Translational studies of relevance of TWEAK/Fn14 and noncanonical NFkB in human disease4. Other TNF superfamily members’ signaling through noncanonical NFkB in the regulation of tissue responses5. Reviews and Perspectives on the above