Plants as alternative hosts for human and animal pathogens 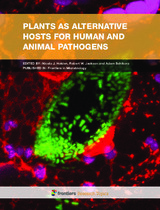 Many of the most prevalent and devastating human and animal pathogens have part of their lifecycle out-with the animal host. These pathogens have a remarkably wide capacity to adapt to a range of quite different environments: physical, chemical and biological, which is part of the key to their success. Many of the well-known pathogens that are able to jump between hosts in different biological kingdoms are transmitted through the faecal-oral and direct transmission pathways, and as such have become important food-borne pathogens. Some high-profile examples include fresh produce-associated outbreaks of Escherichia coli O157:H7 and Salmonella enterica. Other pathogens may be transmitted via direct contact or aerosols are include important zoonotic pathogens. It is possible to make a broad division between those pathogens that are passively transmitted via vectors and need the animal host for replication (e.g. virus and parasites), and those that are able to actively interact with alternative hosts, where they can proliferate (e.g. the enteric bacteria). This research topic will focus on plants as alternative hosts for human pathogens, and the role of plants in their transmission back to humans. The area is particularly exciting because it opens up new aspects to the biology of some microbes already considered to be very well characterised. One aspect of cross-kingdom host colonisation is in the comparison between the hosts and how the microbes are able to use both common and specific adaptations for each situation. The area is still in relative infancy and there are far more questions than answers at present. We aim to address important questions underlying the interactions for both the microbe and plant host in this research topic.