Machineries of oil : An infrastructural history of BP in Iran 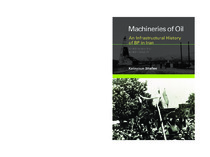 The former headquarters of the international oil corporation that everyone knows today as British Petroleum (BP) were located in the historic Britannic House, Finsbury Circus, in London. The building has a notable history, having been designed between 1921 and 1925 by the celebrated British imperial architect, Sir Edwin Landseer Lutyens, marking his fi rst foray into the design of large corporate buildings ( fi gure 0.1 ). To the left of the entrance to the building is the stone sculpture, “Persian Scarf Dancer,” of a woman performing a traditional Persian dance, by Francis Derwent Wood ( fi gure 0.2 ). The sculpture, along with the building itself, announces the British imperial origins of the oil company in Iran and its former identity as the Anglo-Persian Oil Company, Ltd. At the time of the building’s construction between the two World Wars, transnational oil corporations, including what is now known as BP, emerged as a new kind of political actor in the twentieth century. The building of the world oil industry served as the occasion for one of the largest political projects of technoeconomic development in the latter half of the nineteenth and early twentieth centuries. Along with railroads, dams, electricity and communication networks, and other large-scale technical systems, a vast global network of oil wells, pipelines, refi neries, and transoceanic shipping resulted from this enterprise. One way social scientists explain the development of this energy system is to think of oil as a natural resource that affects political systems, social and economic orders, and state formation from the outside while simultaneously blocking the emergence of democratic forms of politics.