Structure and Function of Chloroplasts 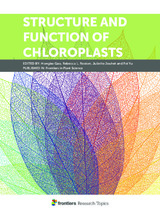 Chloroplasts are plant cell organelles that convert light energy into relatively stable chemical energy via the photosynthetic process. By doing so, they sustain life on Earth. Chloroplasts also provide diverse metabolic activities for plant cells, including the synthesis of fatty acids, membrane lipids, isoprenoids, tetrapyrroles, starch, and hormones. The biogenesis, morphogenesis, protection and senescence of chloroplasts are essential for maintaining a proper structure and function of chloroplasts, which will be the theme of this Research Topic. Chloroplasts are enclosed by an envelope of two membranes which encompass a third complex membrane system, the thylakoids, including grana and lamellae. In addition, starch grains, plastoglobules, stromules, eyespots, pyrenoids, etc. are also important structures of chloroplasts. It is widely accepted that chloroplasts evolved from a free-living photosynthetic cyanobacterium, which was engulfed by a eukaryotic cell. Chloroplasts retain a minimal genome, most of the chloroplast proteins are encoded by nuclear genes and the gene products are transported into the chloroplast through complex import machinery. The coordination of nuclear and plastid genome expressions establishes the framework of both anterograde and retrograde signaling pathways. As the leaf develops from the shoot apical meristem, proplastids and etioplastids differentiate into chloroplasts. Chloroplasts are divided by a huge protein complex, also called the plastid-dividing (PD) machinery, and their division is also regulated by many factors to get an optimized number and size of chloroplasts in the cell. These processes are fundamental for the biogenesis and three-dimensional dynamic structure of chloroplasts.During the photosynthesis, reactive oxygen species (ROS) and other cellular signals can be made. As an important metabolic hub of the plant cell, the chloroplast health has been found critical for a variety of abiotic and biotic stresses, including drought, high light, cold, heat, oxidative stresses, phosphate deprivation, and programmed cell death at sites of infection. Therefore, a better understanding the responses of chloroplasts to these stresses is part of knowing how the plant itself responds. Ultimately, this knowledge will be necessary to engineer crops more resistant to common stresses.With the current global environment changes, world population growth, and the pivotal role of chloroplasts in carbon metabolism, it is of great significance to represent the advancement in this field, for science and society. Tremendous progresses have been made in the field of chloroplast biology in recent years. Through concerted efforts from the community, greater discoveries definitely will emerge in the future.