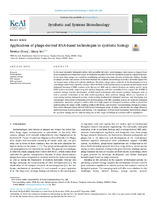 As the most abundant biological entities with incredible diversity, bacteriophages (also known as phages) have been recognized as an important source of molecular machines for the development of genetic-engineering tools. At the same time, phages are crucial for establishing and improving basic theories of molecular biology. Studies on phages provide rich sources of essential elements for synthetic circuit design as well as powerful support for the improvement of directed evolution platforms. Therefore, phages play a vital role in the development of new technologies and central scientific concepts. After the RNA world hypothesis was proposed and developed, novel biological functions of RNA continue to be discovered. RNA and its related elements are widely used in many fields such as metabolic engineering and medical diagnosis, and their versatility led to a major role of RNA in synthetic biology. Further development of RNA-based technologies will advance synthetic biological tools as well as provide verification of the RNA world hypothesis. Most synthetic biology efforts are based on reconstructing existing biological systems, understanding fundamental biological processes, and developing new technologies. RNA-based technologies derived from phages will offer abundant sources for synthetic biological components. Moreover, phages as well as RNA have high impact on biological evolution, which is pivotal for understanding the origin of life, building artificial life-forms, and precisely reprogramming biological systems. This review discusses phage-derived RNA-based technologies terms of phage components, the phage lifecycle, and interactions between phages and bacteria. The significance of RNA-based technology derived from phages for synthetic biology and for understanding the earliest stages of biological evolution will be highlighted.