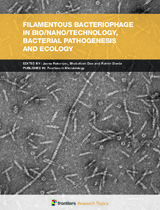 Filamentous phage (genus Inovirus) infect almost invariably Gram-negative bacteria. They are distinguished from all other bacteriophage not only by morphology, but also by the mode of their assembly, a secretion-like process that does not kill the host. “Classic” Escherichia coli filamentous phage Ff (f1, fd and M13) are used in display technology and bio/nano/technology, whereas filamentous phage in general have been put to use by their bacterial hosts for adaptation to environment, pathogenesis, biofilm formation, horizontal gene transfer and modulating genome stability. Many filamentous phage have a “symbiotic” life style that is often manifested by inability to form plaques, preventing their identification by standard phage-hunting techniques; while the absence or very low sequence conservation between phage infecting different species often complicates their identification through bioinformatics. Nevertheless, the number of discovered filamentous phage is increasing rapidly, along with realization of their significance. “Temperate” filamentous phage whose genomes are integrated into the bacterial chromosome of pathogenic bacteria often modulate virulence of the host. The Vibrio cholerae phage CTXf genome encodes cholera toxin, whereas many filamentous prophage influence virulence without encoding virulence factors. The nature of their effect on the bacterial pathogenicity and overall physiology is the next frontier in understanding intricate relationship between the filamentous phage and their hosts. Phage display has been widely used as a combinatorial technology of choice for discovery of therapeutic antibodies and peptide leads that have been applied in the vaccine design, diagnostics and drug development or targeting over the past thirty years. Virion proteins of filamentous phage are integral membrane proteins prior to assembly; hence they are ideal for display of bacterial surface and secreted proteins. The use of this technology at the scale of microbial community has potential to identify host-interacting proteins of uncultivable or low-represented community members. Recent applications of Ff filamentous phage extend into protein evolution, synthetic biology and nanotechnology. In many applications, phage serves as a monodisperse long-aspect nano-scaffold of well-defined shape. Chemical or chenetic modifications of this scaffold are used to introduce the necessary functionalities, such as fluorescent labels, ligands that target specific proteins, or peptides that promote formation of inorganic or organic nanostructures. We anticipate that the future holds development of new strategies for particle assembly, site-specific multi-functional modifications and improvement of existing modification strategies. These improvements will render the production of filamentous-phage-templated materials safe and affordable, allowing their applications outside of the laboratory.