Cerebral endothelial and glial cells are more than bricks in the Great Wall of the brain: Insights into the way the blood-brain barrier actually works (Celebrating the centenary of Goldman's experiments) 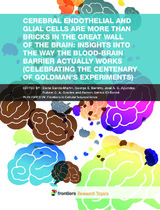 When Ehrlich discovered the first evidence of the blood-brain barrier in 1885, he probably did not perceive the Great Wall that remained hidden from consciousness inside the central nervous system. Ehrlich had observed that acidic vital dyes did not stain the brain if they were injected into the blood stream. A century ago (1913), Goldman showed that the injection of trypan blue in the cerebrospinal fluid stained only the brain, but not the other organs. For almost a century it was thought that the blood-brain barrier (BBB) consisted in a physical barrier, resulting from the restricted permeability of the cerebral endothelial cell layer, as they are joined by tight junctions. However, as scientists are always looking for news in what is already discovered, in the end of the 20th century we had evidences that cerebral endothelial and glial cells express several drug metabolizing enzymes consisting in a second protection system: a metabolic barrier. Furthermore, the drugs and their metabolites must overcome the activity of several multidrug resistance proteins that function as ATP-dependent efflux pumps, consisting in the third line of defence: the active barrier. Therefore, the way the BBB actually works should be better explained. Several endogenous compounds, as well as xenobiotics, may be activated by enzymes of the metabolic barrier, generating reactive oxygen species that could damage neurons. Therefore, endothelial and glial cells possess endogenous protecting compounds and enzymes against oxidants, consisting in an antioxidant barrier. When all these systems fail, glial cells, mainly microglia, secrete cytokines in an attempt to crosstalk with defence cells asking for help, which consists in an immune barrier. In cerebral regions that are devoid of the physical barrier, such as circumventricular organs, the metabolic, active, antioxidant and immune barriers are reinforced. It is important to understand how cells involved in the BBB interact with one another and the dynamic mechanisms of their functions. This Research Topic published in this e-Book considers recent highlights in BBB structure, cell and molecular biology, biotransformation, physiology, pathology, pharmacology, immunology and how these basic knowledges can be applied in drug discovery and clinical researches, rewriting what is already written, and paving the way that goes to the Great Wall in the Frontiers of the Brain in this new century that is just beginning.