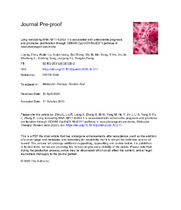 Nasopharyngeal carcinoma (NPC) is one of the most common malignant tumors in southern China and southeast Asia. Emerging evidence revealed that long noncoding RNAs (lncRNAs) might play important roles in the development and progression of many cancers, including NPC. The functions and mechanisms of the vast majority of lncRNAs involved in NPC remain unknown. In this study, a novel lncRNA RP11-624L4.1 was identified in NPC tissues using next-generation sequencing. In situ hybridization (ISH) was used to analyze the correlation between RP11-624L4.1 expression and the clinicopathological features or prognosis in NPC patients. RPISeq predictions and RIP assays were used to identify RP11-624L4.1’s interactions with CDK4. As a result, we found RP11-624L4.1 is hyper-expressed in NPC tissues, which was associated with unfavorable prognosis and clinicopathological features in NPC. By knocking down and over-expressing RP11-624L4.1, we also found that it promotes the proliferation ability of NPC in vitro and in vivo through CDK4/6-CyclinD1-Rb-E2F1 pathway. Overexpression of CDK4 in knocking down RP11-624L4.1 cells can partially rescue NPC promotion, indicating its role of RP11-624L4.1-CDK4/6-CyclinD1–Rb-E2F1 pathway. Taken together, RP11-624L4.1 is required for NPC unfavorable prognosis and proliferation through CDK4/6-CyclinD1-Rb-E2F1 pathway, which may be a novel target for therapeutic and prognostic in patients with NPC.