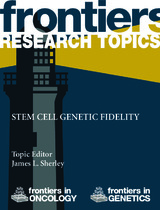 The vision of this Frontiers in Oncology Research Topic on "Stem Cell Genetic Fidelity" had the goal of steeping a diverse range of research perspectives to a first comprehensive synthesis of thought on the questions of how tissue stem cells manage gene mutation rate and the significance of that management in mammalian evolution and biology, in particular as it relates to tissue cell renewal, carcinogenesis, and aging. The primary focus was determinants of mutation rate in distributed stem cells (DSCs), which encompass all naturally occurring stem cells at all stages of mammalian development. In particular, contributions were sought that considered a broad range of aspects of the immortal DNA strand hypothesis for DSC genetic fidelity. Though proposed in 1975, only in the last decade has this landmark concept in tissue cell biology emerged as a central discussion in DSC research with increasing scrutiny and discussion by an increasing number of laboratories of diverse research perspectives and experimental approaches. With this hypothesis presenting a formidable technical challenge for experimental investigation, as would be expected, both supportive and unsupportive reports have been lining up. In the case of supportive studies, neither the range of applicable tissues nor the responsible molecular mechanisms are known; and the essential genomic process, non-random DNA template strand inheritance by asymmetrically self-renewing DSCs, has been suggested to potentially have other cellular roles besides reducing mutation rate. A major aspiration of this Research Topic was to create the first comprehensive, critical synthesis of current insights and viewpoints on the impact of the immortal DNA strand hypothesis in the history of DSC mutation research. A wide range of article types was considered including historical perspectives, critical reviews, critical commentaries, new hypotheses, new research perspectives, technical advances, and original research reports. Although treatments of the immortal DNA strand hypothesis were the major focus, the desired synthesis required integration of related ideas on mechanisms of DSC mutagenesis and its impact in the evolution of mammals, the emergence of cancers, and stem cell aging. As such, investigators focused on issues in e.g., germ stem cell mutagenesis, effects of environmental mutagens on DSC mutation rate, DSC mutation and tissue aging, determinations of types of mutations in DSCs, and the role of DSC mutation in cancer initiation were invited. Similarly, although the specific goal of the Research Topic was to enlighten DSC genetic fidelity in humans and other mammalians, informing contributions based on studies in other model organisms were also welcomed. To achieve even better representation of current experience, advances, and ideas in this field of investigation, these early contributors were encouraged to extend the opportunity to others who shared their interest in advancing our understanding of the mutability of DSCs and its significance in human biology.