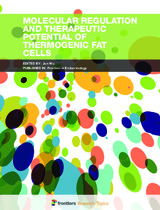 Obesity has emerged as a major threat to public health in both the western and developing world. Essentially a disorder of energy balance, obesity occurs when energy intake and storage exceeds expenditure. Much of energy homeostasis depends on the activity and function of adipose tissue. Adipocytes in mammals fall into two categories classified by their primary functions: white fat cells that mediate energy storage and thermogenic fat cells that counteract hypothermia and obesity through adaptive thermogenesis. Whereas white fat and its function as an energy reservoir and endocrine organ have been studied for decades and are relatively well understood, until recently many aspects of the thermogenic fat biology have remained elusive. Accumulating evidence supports the hypothesis that thermogenic fat cells arise from at least two different developmental origins: the ones of a skeletal muscle-like lineage are now called “classical” brown fat cells, and the rest of the thermogenic fat cells are normally referred to as the beige fat cells. The last decade has witnessed an explosion of interest and studies focusing on the regulation of thermogenic fat cells and potential therapeutics targeting these adipocytes. Here we summarize the recent advancements in our understanding of these metabolically active fat cells.