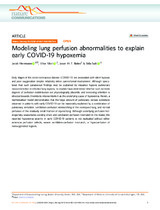 Early stages of the novel coronavirus disease (COVID-19) are associated with silent hypoxia and poor oxygenation despite relatively minor parenchymal involvement. Although speculated that such paradoxical findings may be explained by impaired hypoxic pulmonary vasoconstriction in infected lung regions, no studies have determined whether such extreme degrees of perfusion redistribution are physiologically plausible, and increasing attention is directed towards thrombotic microembolism as the underlying cause of hypoxemia. Herein, a mathematical model demonstrates that the large amount of pulmonary venous admixture observed in patients with early COVID-19 can be reasonably explained by a combination of pulmonary embolism, ventilation-perfusion mismatching in the noninjured lung, and normal perfusion of the relatively small fraction of injured lung. Although underlying perfusion heterogeneity exacerbates existing shunt and ventilation-perfusion mismatch in the model, the reported hypoxemia severity in early COVID-19 patients is not replicated without either extensive perfusion defects, severe ventilation-perfusion mismatch, or hyperperfusion of nonoxygenated regions.