Gram-positive phages: From isolation to application 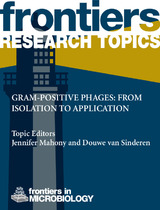 Phage biology is one of the most significant and fundamental aspects of biological research and is often used as a platform for model studies relating to more complex biological entities. For this reason, phage biology has enjoyed focused attention and significant advances have been made in the areas of phage genomics, transcriptomics and the development and characterisation of phage-resistance mechanisms. In recent years, considerable research has been performed to increase our understanding of the interactions of these phages with their hosts using genomic, biochemical and structural approaches. Such multidisciplinary approaches are core to developing a full understanding of the processes that govern phage infection, information that may be harnessed to develop anti-phage strategies that may be applied in food fermentations or applied in a positive sense in phage therapy applications. The co-evolutionary processes of these phages and their hosts have also been a considerable focus of research in recent years. Such data has promoted a deeper understanding of the means by which these phages attach to and infect their hosts and permitted the development of effective anti-phage strategies. Furthermore, the presence and activity of host-encoded phage-resistance systems that operate at various stages of the phage cycle and the potential for the application of such systems consolidates the value of research in this area. Conversely, phages and their components have been applied as therapeutic agents against a number of pathogens including, among others, Clostridium difficile, Lactococcus garviae, Mycobacterium spp., Listeria spp. and the possibilities and limitations of these systems will be explored in this topic. Additionally, phage therapeutic approaches have been applied to the prevention of development of food spoilage organisms in the brewing and beverage sectors and exhonorate the positive applications of phages in the industrial setting. This research topic is aimed to address the most current issues as well as the most recent advances in the research of phages infecting Gram-positive bacteria covering areas such as phages in food fermentations, their impact in industry, phage ecology, genomics, evolution, structural analysis, phage-host interactions and the application of phages and components thereof as therapeutic agents against human and animal pathogens.