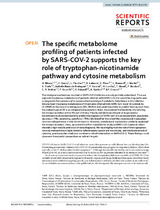 The biological mechanisms involved in SARS-CoV-2 infection are only partially understood. Thus we explored the plasma metabolome of patients infected with SARS-CoV-2 to search for diagnostic and/ or prognostic biomarkers and to improve the knowledge of metabolic disturbance in this infection. We analyzed the plasma metabolome of 55 patients infected with SARS-CoV-2 and 45 controls by LC-HRMS at the time of viral diagnosis (D0). We frst evaluated the ability to predict the diagnosis from the metabotype at D0 in an independent population. Next, we assessed the feasibility of predicting the disease evolution at the 7th and 15th day. Plasma metabolome allowed us to generate a discriminant multivariate model to predict the diagnosis of SARS-CoV-2 in an independent population (accuracy> 74%, sensitivity, specifcity > 75%). We identifed the role of the cytosine and tryptophannicotinamide pathways in this discrimination. However, metabolomic exploration modestly explained the disease evolution. Here, we present the frst metabolomic study in SARS-CoV-2 patients which showed a high reliable prediction of early diagnosis. We have highlighted the role of the tryptophannicotinamide pathway clearly linked to infammatory signals and microbiota, and the involvement of cytosine, previously described as a coordinator of cell metabolism in SARS-CoV-2. These fndings could open new therapeutic perspectives as indirect targets.