Alternatives to Antimicrobial Growth Promoters and Their Impact in Gut Microbiota, Health and Disease 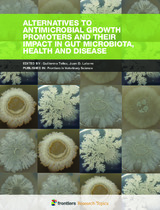 In the context of disease pathogenesis, it has been observed that after inadequate administration of antibiotics, animals become more susceptible to intestinal colonization and organ invasion by enteropathogens, these could be related to changes caused in the gastrointestinal microbial community. Therefore, we must reconsider the negative consequences that disruption of the microbiome has in the biology of metazoans (dysbacteriosis). Alternations of the intestinal microbiota composition in animals can be caused by multiple factors, including the misuse of antibiotics, having as a result a negative impact on the development and function of the immune, endocrine, nervous, and digestive systems. For this reason, social concerns regarding the development of antibiotic-resistant microorganisms have resulted in an urgent necessity to find feasible alternatives to maintain animal health and performance without the use of antibiotic growth promoters (AGP), in order to sustain livestock production as an economically viable source of food for human consumption. Hence, research about AGP alternatives such as probiotics, prebiotics, phytochemicals, organic acids, enzymes, and vaccines has become a priority for many scientists around the world.