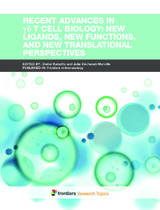 Gamma/delta (γδ) T-cells are a small subset of T-lymphocytes in the peripheral circulation but constitute a major T-cell population at other anatomical localizations such as the epithelial tissues. In contrast to conventional a/ß T-cells, the available number of germline genes coding for T-cell receptor (TCR) variable elements of γδ T-cells is very small. Moreover, there is a prefential localization of γδ T-cells expressing given Vgamma and Vdelta genes in certain tissues. In humans, γδ T-cells expressing the Vg9Vd2-encoded TCR account for anywhere between 50 and >95% of peripheral blood γδ T-cells, whereas cells expressing non-Vd2 genes dominate in mucosal tissues. In mice, there is an ordered appearance of γδ T-cell „waves“ during embryonic development, resulting in preferential localization of γδ T-cells expressing distinct VgammaVdelta genes in the skin, the reproductive organs, or gut epithelia. The major function of γδ T-cells resides in local immunosurveillance and immune defense against infection and malignancy. This is supported by the identification of ligands that are selectively recognized by the γδ TCR. As an example, human Vgamma9Vdelta2 T-cells recognize phosphorylated metabolites („phosphoantigens“) that are secreted by many pathogens but can also be overproduced by tumor cells, providing a basis for a role of these γδ T-cells in both anti-infective and anti-tumor immunity. Similarly, the recognition of endothelial protein C receptor by human non-Vdelta2 γδ T-cells has recently been identified to provide a link for the role for such γδ T-cells in immunity against epithelial tumor cells and cytomegalovirus-infected endothelial cells. In addition to „classical“ functions such as cytokine production and cytotoxicity, recent studies suggest that subsets of γδ T-cells can exert additional functions such as regulatory activity and – quite surpisingly – „professional“ antigen-presenting capacity. It is currently not well known how this tremendous extent of functional plasticity is regulated and what is the extent of γδ TCR ligand diversity. Due to their non-MHC-restricted recognition of unusual stress-associated ligands, γδ T-cells have raised great interest as to their potential translational application in cell-based immunotherapy. Topics of this Research Focus include: Molecular insights into the activation and differentiation requirements of γδ T-cells, role of pyrophosphates and butyrophilin molecules for the activation of human γδ T-cells, role of γδ T-cells in tumor immunity and in other infectious and non-infectious diseases, and many others. We are most grateful to all colleagues who agreed to write a manuscript. Thanks to their contributions, this E-book presents an up-to-date overview on many facets of the still exciting γδ T-cells.