"One rotten apple spoils the whole barrel": The plant hormone ethylene, the small molecule and its complexity 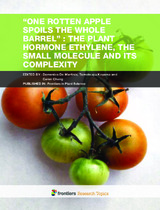 The gaseous molecule ethylene (C2H4), which is small in size and simple in structure, is a plant hormone most often associated with fruit ripening yet has a diversity of effects throughout the plant life cycle. While its agricultural effects were known even in ancient Egypt, the complexity of its mode of action and the broad spectrum of its effects and potential uses in plant physiology remain important scientific challenges today. In the last few decades, the biochemical pathway of ethylene production has been uncovered, ethylene perception and signaling have been molecularly dissected, ethylene-responsive transcription factors have been identified and numerous effects of ethylene have been described, ranging from water stress, development, senescence, reproduction plant-pathogen interactions, and of course, ripening. Thus ethylene is involved in plant development, in biotic and abiotic stress, and in reproduction. There is no stage in plant life that is not affected by ethylene, modulated by a complex and fascinating molecular machinery.