How nature shaped echolocation in animals 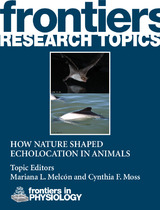 Echolocation has evolved in different groups of animals, from bats and cetaceans to birds and humans, and enables localization and tracking of objects in a dynamic environment, where light levels may be very low or absent. Nature has shaped echolocation, an active sense that engages audiomotor feedback systems, which operates in diverse environments and situations. Echolocation production and perception vary across species, and signals are often adapted to the environment and task. In the last several decades, researchers have been studying the echolocation behavior of animals, both in the air and underwater, using different methodologies and perspectives. The result of these studies has led to rich knowledge on sound production mechanisms, directionality of the sound beam, signal design, echo reception and perception. Active control over echolocation signal production and the mechanisms for echo processing ultimately provide animals with an echoic scene or image of their surroundings. Sonar signal features directly influence the information available for the echolocating animal to perceive images of its environment. In many echolocating animals, the information processed through echoes elicits a reaction in motor systems, including adjustments in subsequent echolocation signals. We are interested in understanding how echolocating animals deal with different environments (e.g. clutter, light levels), tasks, distance to targets or objects, different prey types or other food sources, presence of conspecifics or certain predators, ambient and anthropogenic noise. In recent years, some researchers have presented new data on the origins of echolocation, which can provide a hint of its evolution. Theoreticians have addressed several issues that bear on echolocation systems, such as frequency or time resolution, target localization and beam-forming mechanisms. In this Research Topic we compiled recent work that elucidates how echolocation – from sound production, through echolocation signals to perception- has been shaped by nature functioning in different environments and situations. We strongly encouraged comparative approaches that would deepen our understanding of the processes comprising this active sense.