ACTH Action in the Adrenal Cortex: From Molecular Biology to Pathophysiology 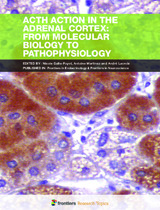 By stimulating adrenal gland and corticosteroid synthesis, the adrenocorticotropic hormone (ACTH) plays a central role in response to stress. In this Research Topic, a particular attention has been given to the recent developments on adrenocortical zonation; the growth-promoting activities of ACTH; the various steps involved in acute and chronic regulation of steroid secretion by ACTH, including the effect of ACTH on circadian rhythms of glucocorticoid secretion. The Research Topic also reviews progress and challenges surrounding the properties of ACTH binding to the MC2 receptor (MC2R), including the importance of melanocortin-2 receptor accessory protein (MRAP) in MC2R expression and function, the various intracellular signaling cascades, which involve not only protein kinase A, the key mediator of ACTH action, but also phosphatases, phosphodiesterases, ion channels and the cytoskeleton. The importance of the proteins involved in the cell detoxification is also considered, in particular the effect that ACTH has on protection against reactive oxygen species generated during steroidogenesis. The impact of the cellular microenvironment, including local production of ACTH is discussed, both as an important factor in the maintenance of homeostasis, but also in pathological situations, such as severe inflammation. Finally, the Research Topic reviews the role that the pituitary-adrenal axis may have in the development of metabolic disorders. In addition to mutations or alterations of expression of genes encoding components of the steroidogenesis and signaling pathways, chronic stress and sleep disturbance are both associated with hyperactivity of the adrenal gland. A resulting effect is increased glucocorticoid secretion inducing food intake and weight gain, which, in turn, leads to insulin and leptin resistance. These aspects are described in detail in this Research Topic by key investigators in the field. Many of the aspects addressed in this Research Topic still represent a stimulus for future studies, their outcome aimed at providing evidence of the central position occupied by the adrenal cortex in many metabolic functions when its homeostasis is disrupted. An in-depth investigation of the mechanisms underlying these pathways will be invaluable in developing new therapeutic tools and strategies.