An assessment of self-reported COVID-19 related symptoms of 227,898 users of a social networking service in Japan: Has the regional risk changed after the declaration of the state of emergency? 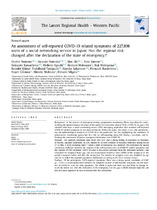 Background: In the absence of widespread testing, symptomatic monitoring efforts may allow for understanding the epidemiological situation of the spread of coronavirus disease 2019 (COVID-19) in Japan. We obtained data from a social networking service (SNS) messaging application that monitors self-reported COVID-19 related symptoms in real time in Fukuoka Prefecture, Japan. We aimed at not only understanding the epidemiological situation of COVID-19 in the prefecture, but also highlighting the usefulness of symptomatic monitoring approaches that rely on self-reporting using SNS during a pandemic, and informing the assessment of Japan’s emergency declaration over COVID-19. Methods: We analysed symptoms data (fever over 37.5° and a strong feeling of weariness or shortness of breath), reported voluntarily via SNS chatbot by 227,898 residents of Fukuoka Prefecture during March 27 to May 3, 2020, including April 7, when a state of emergency was declared. We estimated the spatial correlation coefficient between the number of the self-reported cases of COVID-19 related symptoms and the number of PCR confirmed COVID-19 cases in the period (obtained from the prefecture website); and estimated the empirical Bayes age- and sex-standardised incidence ratio (EBSIR) of the symptoms in the period, compared before and after the declaration. The number of symptom cases was weighted by age and sex to reflect the regional population distribution according to the 2015 national census. Findings: Of the participants, 3.47% reported symptoms. There was a strong spatial correlation of 0.847 (p < 0.001) at municipality level between the weighted number of self-reported symptoms and the number of COVID-19 cases for both symptoms. The EBSIR at post-code level was not likely to change remarkably before and after the declaration of the emergency, but the gap in EBSIR between high-risk and low-risk areas appeared to have increased after the declaration.