What’s in a name?: Mesoamerica 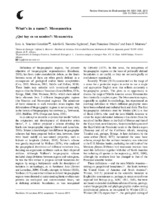 Definition of biogeographic regions, the primary objective of biogeographic regionalization (Escalante, 2009), has been under considerable debate, as the limits between some of them are often poorly defined as a consequence of geological and/or biotic complexities (Cox, 2001; Morrone, 2002; Riddle and Hafner, 2010). These limits may coincide with transitional complex regions –like the Mexican Transition Zone (Halftter, 1976; Savage, 1960, 1966; Morrone, 2010)– which show mixed biotic elements from 2 different biogeographic regions (the Nearctic and Neotropical regions). The admixture of biotic elements in such transition zones implies that delimitation of biogeographic regions is not an easy task, as the history of biogeography has shown (e.g., Townsend, 1895; Halffter, 1976; Ortega and Arita, 1998). In an attempt to describe a system that would “reflect the origination and development of distinctive avian biotas”, P. L. Sclater proposed a scheme dividing the Earth into biogeographic regions (Brown and Lomolino, 2000). Sclater acknowledged that different biogeographic schemes had been proposed before him; however, these were based mainly on non-natural properties, such as latitude or longitude (Sclater, 1858). Sclater's scheme was greatly improved by Wallace (1876), who analyzed the geographical distribution of different vertebrate taxa, focusing on organismic attributes such as their dispersal abilities. Although Wallace's biogeographic scheme included sharp divisions between regions and subregions, he was the first author to propose natural boundaries for regions by using a bathymetric scale for description of isolation in archipelagos, as in Southeast Asia (Brown and Lomolino, 2000). Clearly, attempts by Sclater (1858), Wallace (1876), and other authors to delimit biogeographic regions were directed at understanding biotic evolutionary patterns on ecological and environmental bases, not at defining arbitrary boundaries, as was recognized by Udvardy (1975). In this sense, the recognition of biogeographic regions on the basis of politically defined boundaries is not useful, as they are not ecologically or evolutionary meaningful.