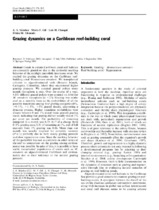 Corals in certain Caribbean coral reef habitats are constantly grazed-on due to the territorial marking behavior of the stoplight parrotfish Sparisoma viride. We studied the grazing dynamics on the Caribbean reefbuilding coral Montastraea annularis. We transplanted colonies to algae-dominated reefs (Rosario Islands, Cartagena, Colombia), where they encountered higher grazing pressure. We counted grazed polyps every month throughout a year. Over the course of a year, 4,101 different grazed polyps were counted on lobe-like M. annularis transplants (n =23). Grazing was evaluated on a monthly basis as the probabilities of all the possible transitions among four grazing categories (0%, >0–1%, >1–5%, >5% grazed tissue), uncovering a dynamic process. Higher transition probabilities were always between 0 and 1% (coral tissue grazed) grazing states, indicating that grazing did not usually exceed 1% per coral per month. The probability of remaining uninjured in a month was 0.19, 0.17 of a change from 0–1% grazing state, 0.31 of remaining at 1%, and of full recovery from 1% grazing was 0.16. More than one month was usually required for complete recovery (P 1) probably due to both steady grazing pressure and slow regeneration rates. Since the marking behavior of the parrotfish was not as common on other zones of the reef no comparison on the grazing among environments was possible. In spite of this, it is possible to have stable transplanted populations of corals such as M. annularis on algae-dominated Caribbean reef environments due to their tolerance to the natural grazing pressure.