Liver transplantation for secondary liver tumors: the difficult balance between survival and recurrence 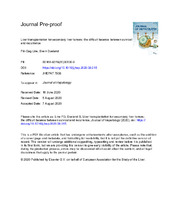 The concept of liver transplantation in patients with secondary malignant liver tumors was explored at different points of the liver transplant era but was hampered by inferior outcomes and high recurrence rates, and therefore abandoned [1,2]. Similar results were evident in transplantation for hepatocellular carcinoma (HCC) until robust clinical selection criteria was introduced [3]. Colorectal cancer (CRC) is the most prevalent metastatic cancer type in the liver [4]. Neuroendocrine tumors (NET) are relatively rare, slow growing cancers most often in the gastrointestinal tract or the respiratory system and the mode of presentation may be heterogeneous ranging from asymptomatic to the carcinoid syndrome. Liver metastases (MNET) is the most frequent metastatic manifestation in NET with a rate of about 50% [5]. The standard of care for liver metastases from colorectal cancer (CRLM) and MNET is usually liver resection, frequently preceded by neoadjuvant therapy, but is only possible in a smaller proportion of the patients. Palliative therapy aimed at slowing tumor progression is the main treatment option in the majority of cases. Liver transplantation could be an alternative in non-resectable metastases, but this is controversial. Patients with metastatic cancer have by definition disseminated malignant disease and increased risk of aggressive recurrence from dormant disease is conceivable. Chronic immunosuppression increases the incidence of de-novo malignancy and could theoretically increase the risk of relapse after transplantation. Furthermore, dismal prognosis has been reported in transplanted patients developing malignant disease compared to the general population [6]. Finally, the scarcity of liver grafts for transplantation urges caution in introducing new, controversial transplant indications.