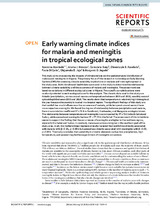 This study aims at assessing the impacts of climate indices on the spatiotemporal distribution of malaria and meningitis in Nigeria. The primary focus of the research is to develop an Early Warning System (EWS) for assessing climate variability implications on malaria and meningitis spread in the study area. Both climate and health data were used in the study to determine the relationship between climate variability and the occurrence of malaria and meningitis. The assessment was based on variations in diferent ecological zones in Nigeria. Two specifc sample locations were randomly selected in each ecological zone for the analysis. The climatic data used in this study are dekadal precipitation, minimum and maximum temperature between 2000 and 2018, monthly aerosol optical depth between 2000 and 2018. The results show that temperature is relatively high throughout the year because the country is located in a tropical region. The signifcant fndings of this study are that rainfall has much infuence on the occurrence of malaria, while temperature and aerosol have more impact on meningitis. We found the degree of relationship between precipitation and malaria, there is a correlation coefcient R2 ≥ 70.0 in Rainforest, Freshwater, and Mangrove ecological zones. The relationship between temperature and meningitis is accompanied by R2 ≥ 72.0 in both Sahel and Sudan, while aerosol and meningitis harbour R2 = 77.33 in the Sahel. The assessment of this initial data seems to support the fnding that the occurrences of meningitis are higher in the northern region, especially the Sahel and Sudan. In contrast, malaria occurrence is higher in the southern part of the study area. In all, the multiple linear regression results revealed that rainfall was directly associated with malaria with β= 0.64, p= 0.001 but aerosol was directly associated with meningitis with β= 0.59, p< 0.001. The study concludes that variability in climatic elements such as low precipitation, high temperature, and aerosol may be the major drivers of meningitis occurrence.