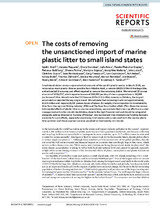 Small island states receive unprecedented amounts of the world’s plastic waste. In March 2019, we removed as much plastic litter as possible from Aldabra Atoll, a remote UNESCO World Heritage Site, and estimated the money and efort required to remove the remaining debris. We removed 25 tonnes at a cost of $224,537, which equates to around $10,000 per day of clean-up operations or $8,900 per tonne of litter. We estimate that 513 tonnes (95% CI 212–814) remains on Aldabra, the largest accumulation reported for any single island. We calculate that removing it will cost approximately $4.68 million and require 18,000 person-hours of labour. By weight, the composition is dominated by litter from the regional fshing industry (83%) and fip-fops from further afeld (7%). Given the serious detrimental efects of plastic litter on marine ecosystems, we conclude that clean-up eforts are a vital management action for islands like Aldabra, despite the high fnancial cost and should be integrated alongside policies directed at ‘turning of the tap’. We recommend that international funding be made available for such eforts, especially considering the transboundary nature of both the marine plastic litter problem and the ecosystem services provided by biodiversity-rich islands.