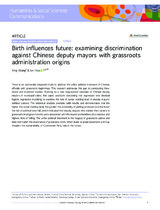 There is no systematic empirical study to address the unfair political treatment of Chinese officials with grassroots beginnings. This research addresses this gap by conducting theoretical and empirical studies. Drawing on a new biographical database of Chinese deputy mayors of municipal cities, this paper conducts competing risk regression and classical logistic regression modeling to examine the role of career starting level in deputy mayors’ political careers. The empirical analysis provides solid results and demonstrates that the higher the career starting level, the greater the probability of getting promoted and the lower the risk of political downfall, which indicated that deputy mayors who started their careers in grassroots-level governments were associated with the lowest probabilities of promotion and highest risks of falling. The unfair political treatment is the tragedy of grassroots cadres and does not match the importance of grassroots work, which leads to great discontent and may threaten the sustainability of Communist Party rule in the future.