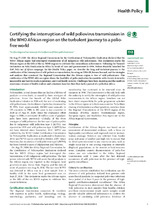 The Africa Regional Commission for the Certification of Poliomyelitis Eradication

On Aug 25 2020, the Africa Regional Commission for the Certification of Poliomyelitis Eradication declared that the WHO African region had interrupted transmission of all indigenous wild polioviruses. This declaration marks the African region as the fifth of the six WHO regions to celebrate this extraordinary achievement. Following the Yaoundé Declaration on Polio Eradication in Africa by heads of state and governments in 1996, Nelson Mandela launched the Kick Polio out of Africa campaign. In this Health Policy paper, we describe the long and turbulent journey to the certification of the interruption of wild poliovirus transmission, focusing on 2016–20, lessons learned, and the strategies and analyses that convinced the Regional Commission that the African region is free of wild polioviruses. This certification of the WHO African region shows the feasibility of polio eradication in countries with chronic insecurity, inaccessible and hard-to-reach populations, and weak health systems. Challenges have been daunting and the sacrifices enormous—dozens of health workers and volunteers have lost their lives in the pursuit of a polio-free Africa.