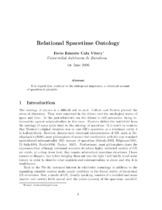 The ontology of physics is a difficult soil to seed. Leibniz and Newton planted the arena of discussion. They were concerned in the debate over the ontological status of space and time. In the post-relativistic era the debate is still persuasive, facing relationalists against substantivalists in this issue. Einstein shifted the battlefield from the ontology of space (plus time) to the ontology of spacetime. It is worth to mention that Einstein’s original intention was to cast GR’s spacetime as a relational entity `a la Leibniz-Mach. However, despite early relational interpretations of GR -such as Reichenbach’s (1928)- most philosophers of science feel comfortable with the now standard sophisticated substantivalist (SS) account of spacetime (Mundy:1992, Brighouse:1994, Di Salle:1994, Hoefer:1996, Pooley: 2002). Furthermore, most philosophers share the impression that although relational accounts of certain highly restricted models of GR are viable, at a deep down level, they require substantival spacetime structures. I have reasons to disagree, but before bringing them out into the light I will briefly recall some history in order to describe what sophisticated substantivalism is about and why it is troublesome.