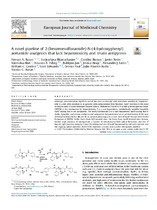 Although acetaminophen (ApAP) is one of the most commonly used medicines worldwide, hepatotoxicity is a risk with overdose or in patients with compromised liver function. ApAP overdose is the most common cause of acute fulminant hepatic failure. Oxidation of ApAP to N-acetyl-p-benzoquinone imine (NAPQI) is the mechanism for hepatotoxicity. 1 is a non-hepatotoxic, metabolically unstable lipophilic ApAP analog that is not antipyretic. The newly synthesized 3 is a non-hepatotoxic ApAP analog that is stable, lipophilic, and retains analgesia and antipyresis. Intraperitoneal or po administration of the new chemical entities (NCEs), 3b and 3r, in concentrations equal to a toxic dose of ApAP did not result in the formation of NAPQI. Unlike livers from NCE-treated mice, the livers from ApAP-treated mice demonstrated large amounts of nitrotyrosine, a marker of mitochondrial free radical formation, and loss of hepatic tight junction integrity. Given the widespread use of ApAP, hepatotoxicity risk with overuse, and the ongoing opioid epidemic, these NCEs represent a novel, non-narcotic therapeutic pipeline.