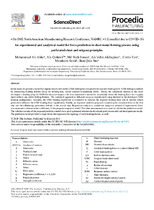 In this work, we present a model for origami-based sheet metal (OSM) folding that can predict the required bending force. OSM folding is enabled by introducing bending features along the bending line, named material discontinuity (MD). Firstly, the introduced analysis in this work developed a bending setup for OSM that does not require a die then introduced a method to analytically derive the bending force for a regular sheet without any added folding features. The analytical approach is followed using an experimental setup identical to the developed OSM bending configuration. Secondly, the OSM bending experiment is conducted to measure the required bending force and to identify which parameters influence the OSM bending force significantly. Finally, an empirical model is proposed considering the analytical force in the first step and the influencing parameters defined in the second step. Regression analysis is carried out using one portion of experimental force measurement to determine the coefficients of the proposed empirical model. The other measurement set is used to validate the prediction model. The validation results of the proposed prediction model show good agreement between the developed prediction model and the experiment results. The prediction model provided a shape factor that represents the topology of each bending feature, as well.