Relationship between hydrothermal treatment parameters as a strategy to reduce layer charge in vermiculite, and its catalytic behavior 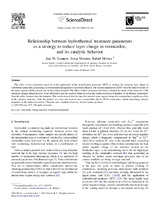 The effect of two parameters involved in the application of the hydrothermal treatment (HTT) as strategy for reducing layer charge in Colombian vermiculite, preceding a conventional pillaring process has been evaluated. The selected parameters in HTT were the time of contact of the water vapour and the particle size of the starting mineral. The effect of these parameters has been evaluated by means of the detection of the structural changes determined by X-ray diffraction and the catalytic behavior using the hydroconversion of heptane of Al-pillared vermiculites from the solids obtained after the treatment. The results showed that the time of contact of water vapour during the treatment has a significant effect in the catalysts structure, while the particle size does not seem to have considerable effects. Pt/Al-vermiculites exhibit interesting catalytic properties in the hydroconversion of heptane and a marked selectivity toward isomer products.