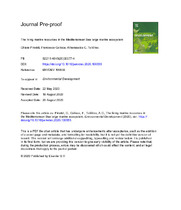 he Mediterranean Large Marine Ecosystem (Med-LME) is a heterogeneous system that, despite its oligotrophic nature, has high diversity of marine species and high rate of endemism, making it one of the world hotspots for marine biodiversity. The basin is also among the most impacted Large Marine Ecosystems in the world due to the combined multiple stressors, such as fishing pressure, habitat loss and degradation, climate change, pollution, eutrophication and the introduction of invasive species. The complexity of Med-LME in its structure/function and dynamics, combined with the socio-political framework of the region make management of its marine resources quite challenging. This contribution aims at highlighting the importance of the Med-LME, with an emphasis on the state of its food web and of its fish/fisheries using modelling tools and national/international reporting. The purpose is to demonstrate the importance of an holistic framework, based on stock assessments and ecosystem based modelling approaches, to be adopted in support of management and conservation measures for the preservation and sustainable use of the Med-LME resources.