Testing of the CHEMTAX program in contrasting Neotropical lakes, lagoons and swamps 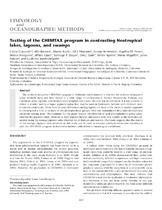 The problem using the CHEMTAX program in freshwater environments is that the few matrices of pigmentratios available have not been tested in a wide range of environments. Sixteen Amazonian, Andean, andCaribbean lakes, lagoons, and swamps were sampled over a year. The aim was to determine if it was possible toobtain a reliable matrix of input pigment ratios that may be used in freshwater habitats with different environmental conditions. There were no clear differences among regions for most of the ratios of marker pigmentsto Chlorophyll a (Chl a) in most of the phytoplankton groups. Only the zeaxanthin / Chl a ratio showed clearvariations among areas. The estimates for the mean relative contribution of each phytoplankton group calculated for the pigment ratios obtained in each separate habitat and season were very similar to the estimates calculated using the average pigment ratio obtained for all habitats and seasons. Our study suggests that the matrixof the average pigment ratio obtained in this study can be used to estimate phytoplankton class abundanceswith the CHEMTAX program in freshwater habitats with different limnological conditions.