Provision of care through telemedicine during a natural disaster: a case study 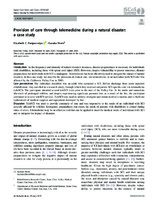 Introduction As the frequency and intensity of natural disasters increases, disaster preparedness is necessary for individuals with disabilities, including those with spinal cord injury (SCI). However, despite vulnerability to poorer outcomes, disaster preparedness for individuals with SCI is inadequate. Telemedicine has been effectively used to mitigate the impact of natural disasters. In this case study, we describe the provision of clinical care, via telemedicine, to an individual with SCI who was affected by the California Valley Fire in 2015. Case presentation The individual described was an adult who sustained a SCI. Before discharge from acute inpatient rehabilitation, they enrolled in a research study, through which they received outpatient SCI-specific care via telemedicine (teleSCI). The participant attended several teleSCI visits prior to the start of the Valley Fire. In the midst and immediate aftermath of prolonged wildfire, and despite experiencing significant personal loss as a result of the fire, the participant continued to receive teleSCI services. TeleSCI was used to address emergent and extant medical concerns and to facilitate replacement of medical supplies and equipment destroyed by fire. Discussion TeleSCI was used to provide continuity of care and was responsive to the needs of an individual with SCI severely affected by wildfire. Emergency preparedness that meets the needs of persons with disabilities is critical during times of crisis. Telemedicine may be an effective tool that can be applied to meet the medical needs of individuals with SCI and to mitigate the impact of disasters.