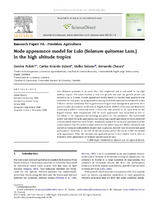 Lulo (Solanum quitoense) is an exotic fruit that originated and is cultivated in the high Andean tropics. The plant exhibits a very low growth rate and the growth period can extend to up to 2 years. A node appearance model based on thermal time approach was calibrated for this plant, by using datasets coming from field experiments conducted under different climate conditions. Plants, grown according to local management practices, were planted under greenhouse conditions at Bogota´ Plateau (2560 m elevation) and Miraflores municipality (1850 m elevation) while a field crop was planted in an open field on the Bogota´ Plateau. Base temperature (Tb) for node appearance was estimated as 9.61 C according to the regression methodology proposed for this parameter. An exponential model was fitted for node appearance rate (dn) giving a good agreement between observed and simulated values for each dataset. Sensitivity analysis for estimated parameters of the model showed that Tb exerted a major influence on model response. Model validation was carried out using an independent dataset and, in general, showed that the model had good performance. However, at the end of the simulation period the model under estimated node appearance. Thus, the thermal time approach proved to be a reliable tool in order to represent node appearance for tropical species such as Lulo.